Back in October, I was browsing the internet and found a Living Social deal for an Upper West Side photographer who was doing a one-week special on portrait shots. This photographer had a link and I of course checked it out. I was instantly drawn to the stark, rugged nature of this person’s shots. There were some beautiful wide-scenes of snowy mountains all frost-like, and the studio shots of regular people were equally stunning with simple, yet bold clarity. I showed this photographer’s website to my friend Liska (the one I spend many, many hours talking camera shop with), and her response was simply brief—she said, “I can totally tell a man took these pictures.”

Of course, I was perplexed. How can you tell? “I’ve looked at so many photographs in my life that I can just tell.” I asked her to explain. She couldn’t, but she remained steadfast that—in her opinion—women and men photographers have their attention trained on completely different things when taking photographs. 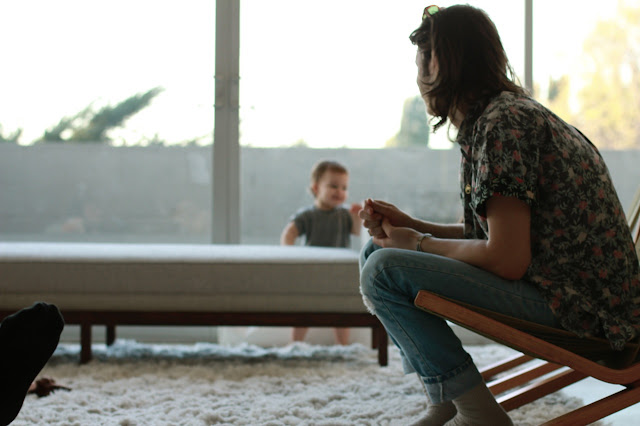 Liska captures a moment here with her husband, Nate.

I looked at some of my early photographs for this blog. Look at this photo:

It was the first photo I took at a party last fall, of my friend Kat’s shoes. What I loved about the photo then (and now) was the simplicity of execution being paid off with so much sharpness and clarity. As I took more photos and thought more about putting images up in public space, Liska’s words continued to dog me. Women and men focus their attention on different aspects of a photo? What did that mean?

I turned to the internet and found a few debates in forums and on Flickr about this very topic. Unfortunately, all of the experts cited said the same roundabout business which was, Men and women invariably see things, situations differently, and this affects how they take a shot. Conflict photojournalism lends the best example: is a photo depicting a refugee family about the brilliance of pain and suffering, or about harrowing love and the desire to survive and evoke profound sympathy from the viewer? Alas, Lord Ashbury (the blog) doesn’t deal in these heavy matters.

But what is important is that my question wasn’t answered. I kept going back to the things I liked about my photos at the time. Sharpness and clarity:

And then it happened: Some time shortly after I worked my first paid shoot, my assistant Lydia and I were talking about [a famous photographer and his famous photographer girlfriend] when she offered as a throwaway remark, “I think [he’s] great, but I love [her] photos. I think it’s because she’s coming from a more artistic place, being an illustrator.” Up to this point I’d largely considered the pair’s photography to be of equal aesthetic value with very negligible technical differences, with the exception of a certain style of staging. I went home and poured over hundreds of photos between the two of them, and of other photographers I’ve come to like and admire (both women and men). What I discovered was that many of the men shot to strengths I’d so often strived to perfect myself: clarity and sharpness.

There’s the old adage: “I Tarzan, You Jane.” I feel like for men, this is equivalent to “That would make an awesome shot, I must capture that thing!” Our subjects are generally in distinct focus; photographers like the esteemed Andre Wagner take these amazing photos where every shape and contrast and colour are in precise places, divided by precise lines.

Wagner shoots for the Street Etiquette guys from time to time—make no mistake he is fantastic with a camera in his hands. But, if I had to dumb down my point so that a child could understand, I would put it this way:

If this were kindergarten, photographs taken by men would be coloring books; all the lines are provided, one simply fills in the right amount of colour to desired effect. Photographs taken by women, however, would look like watercolours on construction paper; vivid, abstract, free-flowing with colours bleeding completely outside of the lines on purpose.

I’ve noticed that women have an uncanny way of using light as a means to communicate language in a scene. Men like to control light, stop it down, shine on the subject in just the right way so that saturation and shadows are attenuated in a particular way. Women like to embrace light, let it fill up a frame with complete freedom. If the colours get washed out, men pull in the reigns; women happily say, “So be it.”

I’m biased, but one of my all time favourite women photographers is Bliss Katherine, and not just because she’s shot for both of my book covers. Her photos burst with vivid colour all the time; things are saturated, faded, thrown into a tie-dye blender and then stretched out to form again. Her work constantly forces me to take light—something I’ve always regarded with special attention—and have even more of a dialogue with it: Light, clarity, and colour aren’t the only differences I notice. When a subject is in motion, men track it down and shoot it as if they are hunting—and it must be captured in magnificent form. Women allow things to flow—the whole cliche about wild horses comes to mind, except in pictures it’s a very distinct attribute. Actually, here are two photos of wild horses!

These of course are not hard facts or truths about photography, simply things that I have noticed. There are plenty of women who shoot for clarity and sharpness in their photos. I’m harder pressed to find a bevy of men who strive for euphoric light and colourscapes. This may have something to do with the fact that women are generally sharper definers of colour than men. On the other hand, are men and women hard-wired to see the world—and therefore, capture it—according to their codes? When I started composing this piece last night, I sent the first few paragraphs to my dear friend Catherine (who is not a photographer) to solicit her opinion. She wrote:

“I’m of the opinion that men and women are not as different as we like to think we are, but certainly by the time a person is old enough to pick up a camera, they’ve been socially constructed to see the world in a certain way based on their gender.”

It’s been several hours now and I’m still considering this. Catherine made me finally think of Anne Leibovitz, the iconic photographer who made her bones decades ago for Rolling Stone. Leibovitz is what I’ve always considered an anomaly because she basically shoots like a man, but better than a man can. Her main influences coming up were men, so there’s that. But I’m also mindful of how different (or not) the journalism world was back then, and what it must have been like for her working at that magazine in those times.

I suppose like all photographers, or artists really, I’d like to say that the more I shoot, the more my work will evolve, mature. It’s inevitable that one day that maturation will turn to saturation. I don’t think I’d want people to look at my photos and think, “Oh, a man must have taken these.” The reality though is that most people won’t consider this at all. But I always consider it, I’m always striving for the unique, even if some may think I continually fail at it.

*For those of you interested in this topic as I am, I encourage you to check out Kerrie Mitchell’s PopPhoto article from 2009, “Do Men and Women Take Different Photos?”